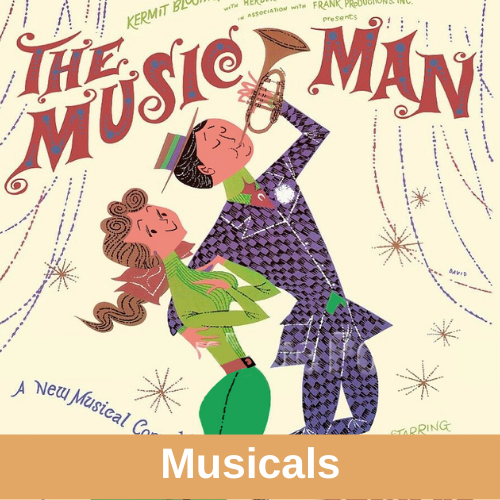 Musicals come in all shapes and sizes. Musicals combine the elements of acting, singing songs that detail the story, spoken dialogue, and dancing. The stories convey a wide range of emotions and are sometimes adapted from book and plays. Musicals can be based around a variety of genres of music – some have even featured rock and rap music.

The Music Man is a musical that was originally a book by Meredith Willson and Franklin Lacey. Meredith Willson brought his book to Broadway in 1957 and wrote the lyrics and music to this production. This musical follows the story of a con man who sells band instruments to the people of a small town with promises of teaching them how to play. He plans to skip town, but an unexpected connection changes the trajectory of the story.

The song “Till There Was You” became a popular tune and was a moderate success on the charts. It was even covered by The Beatles

There were bells on the hill

But I never heard them ringing,

No, I never heard them at all

Till there was you.

There were birds in the sky

But I never saw them winging

No, I never saw them at all

Till there was you.

This is a great song to use in a 1:1 setting or group and would go well with a collection of songs about musicals or a collection of love songs. It can be used as a transition into group discussion, an opportunity for discussion, musical engagement, movement and more.

Theme: This song would fit well into a collection of songs from musicals or love songs.  Other complementary songs may include “She Loves You”, “Singing in the Rain” and “Anything You Can Do”

Encourage the group to share a beloved memory, events, or experience that feels sentimental or beautiful to them. (Note: if you reminisce on relationships, take into consideration the backgrounds and histories of the individuals in your group.)

Invite discussion: did anyone in the group perform in a musical, work as a stage hand, or play in the pit orchestra?

Watch The Music Man and discuss thoughts and opinions on the movie at the end of the film.

Movement: Try out expressive movement along to the song or simply sway along to this romantic tune.

Listen to and add instruments to another of the popular songs from the musical, “Seventy-Six Trombones.” Some options: shakers or body percussion like tapping toes and clapping hands.